Whether you choose to call it a sport or a game (you’d be surprised at the amount of dust this topic can stir up among darts enthusiasts), you’re going to have to learn some darts rules before you even think of playing.

We have a long list of rules ahead of us, so let’s get to it!

Okay, let's cover the basics first, and go from there.

Besides the actual darts, one of the essential pieces of equipment you’ll have to set up is the dartboard itself. 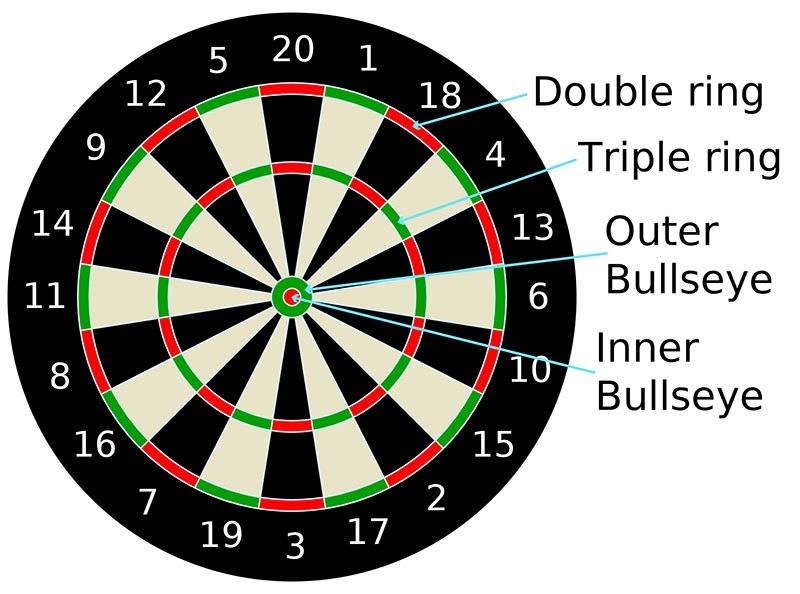 A standard dartboard, commonly known as a “clock” board, features pre-determined measurements and layouts

Whether you’re playing with the soft tip or steel tip darts, the height stays the same – exactly 5 feet 8 inches. You should measure that from the center of the bull’s eye.

Pay attention to how you're mounting the dart board, too – it should be sitting flush against the wall. Also, the number 20 should be at the top. 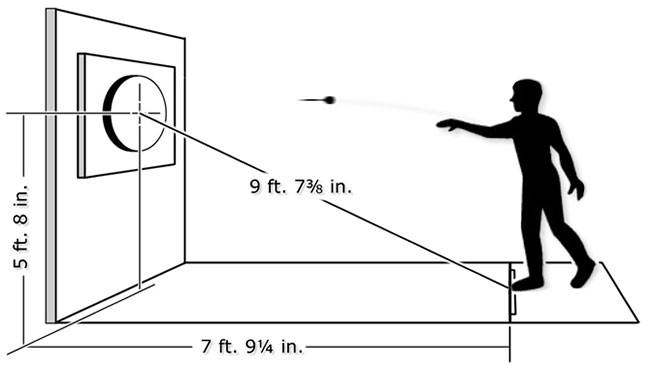 The distance from the dartboard itself to the throw line is regulated, as well, and it largely depends on the type of darts you’re playing with – soft tip or steel tip:

You can pretty much use anything to mark the throw line, as long as it’s visible to all players involved – even a piece of tape is more than enough.

However, if you’re playing in a tournament, don’t be surprised to see a raised piece of wood, called the "Oche" or the "Hockey," used to mark the toe-line, instead.

Well, almost always – but more on that later. Here are some key points you need to remember, though:

Darts Rules: 10 Popular Darts Games and How to Play Them 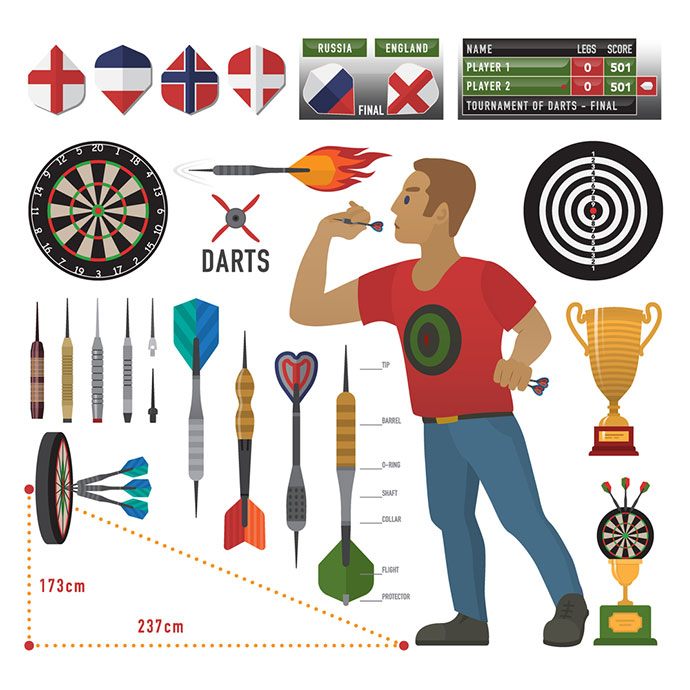 There are tons of different dart games you can play, and each one of them brings about a slightly different set of rules.

Below, you’ll find a detailed breakdown of the 10 most popular darts games and their respective rules.

If you’ve ever seen someone play darts before – even if it was a casual Friday-night-in-a-pub type of game – chances are they’ve played cricket.

Luckily, the basics of cricket are pretty straightforward, so they shouldn’t be too hard to learn, even for a total darts newbie!

You can play cricket one-on-one, or you can split up into two teams. The rules don’t prevent more people from joining the game, as long as you keep the number of players on each side the same.

The only numbers you should care about are 15 through 20, plus the bull’s eye.

The player that manages to close the numbers in play, while obtaining a score that is higher than that of their opponent, is the winner.

That said, if, by the end of the 20th turn, you have tied scores, the player who closed out more numbers on the dartboard wins.

Here are a few simple tricks to nail your next game of Cricket darts: 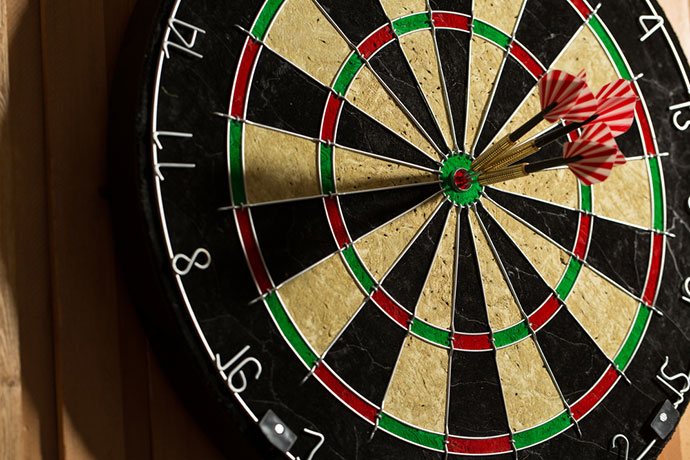 Featuring a fairly simple set of darts rules, the ’01 Games – such as 301, 501, and the like – will allow you to focus on your throwing, and work on your accuracy.

Here’s what I mean!

As a general rule, there are either two people or two teams playing.

The entire board is in play, but some numbers are more “useful” than others.

The winner is the first player that succeeds in getting their score down to an exact zero.

Always go for the strongest number that your skill level allows – that’s the only tip you need here!

Okay, if you’ve never played Around the World, also known as Around the Clock or Once Round the Island, I’ll give you a little hint as to what this game is all about:

You go around the clock, aiming to hit each number in ascending order – simple, yet tricky enough to make it fun!

​You’re free to include as many people as you’d like.

​The game employs the entire dartboard. The bull’s eye is typically excluded from the game.

The first person to make it “around the world” – hit all numbers, 1 through 20 – is the winner.

Strategy Tips for Playing Around the World

Unfortunately, there isn’t any – the game is pretty straightforward, so there’s not much room for strategies.

However, I do have some tips for making the game more interesting – as well as challenging:

No, not that type of baseball – we’re talking about darts games here, remember?

As a general rule, any number of people can play this darts version of baseball, but it works best if there are two or more people involved, and playing as teams.

​The numbers used are 1 through 9, although the game can extend beyond that limit in case there’s a tie at the end of the last (ninth) inning.

Since the objective of the game is relatively similar to that of actual baseball, the player who scored the most runs at the end of the 9th inning wins.

I could give you a piece of pretty obvious advice – try to score as many runs as possible – but that’s it.

The innings are pre-determined, so there’s no way to go around them or to plot a fool-proof plan for winning:

Either you’ll hit the right number, or you won’t – and that’s all there is to it. 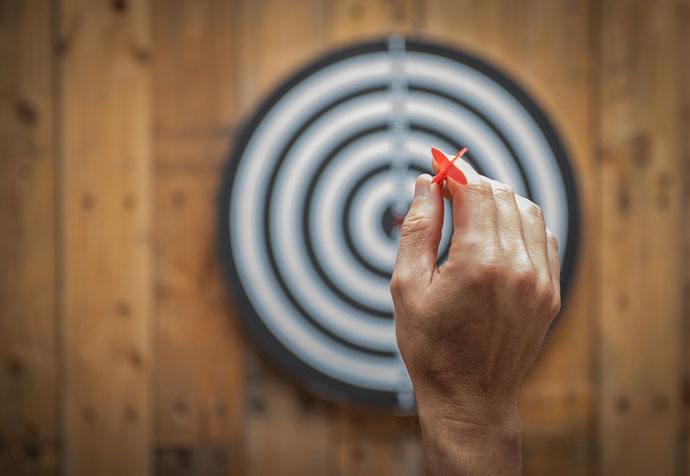 Are you ready to become a Killer?

Okay, that came out wrong.

I promise it’s not as sinister as it sounds!

​There are no rules, but I find this game to be more fun when there are at least three players involved.

​The numbers used are “selected” by the players themselves – you’ll see what I mean.

The last player to have any remaining lives is the winner.

There’s isn’t much to strategize about in Killers – but that doesn’t mean I won’t give you a few handy tips for your next game:

Remember when we talked about Baseball?

You’re going to notice some similarities between these two because they’re pretty much variations of the same game – you’ll see what I’m talking about in a moment.

​Any given number of people can play the game, although it tends to be more fun when there are several players involved. Don’t be surprised if you see a group of a dozen or so people playing Shanghai.

​Shanghai uses numbers 1 through 7, which corresponds to the number of “innings” in the game.

There are two ways to win:

Either by having the most points at the end of the 7th run, or by scoring a “Shanghai” – hitting a single, a double, and a triple, all in one turn.

Unfortunately, there aren’t any real strategy tips to discuss here.

Best Dart Board Backboard: 5 Backboards For The Ultimate Wall Protection

Where does the name Halve-It come from, you ask?

It has everything to do with the fact that you risk losing half your score in each turn!

If you want a game of darts that will challenge you in all the right ways, this one’s it.

​You’re going to need at least two players to get things going. That said, if more than two people are involved, you can split up into teams, or play as several single players.

​All numbers on the dartboard are in play here, but they’re pre-established, and differ in each round.

At the end of the last round, the person with the highest score is the winner.

The following tips don’t quite count as strategic, but they’re worth mentioning, anyway: 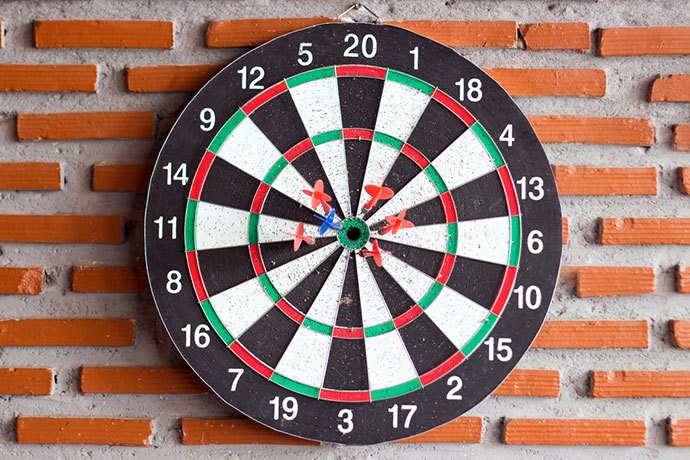 If you’re not careful, you’ll lose a leg.

​There are no specific rules, but in my experience, the game is a lot more fun when there are several people involved.

​All numbers on the dartboard are in play, but due to the nature and objective of the game (which I’ll explain in a moment) you’re better off aiming for 19 or 20.

The winner here is the last player left with any remaining legs – the last man standing if you will.

Due to the nature of the game, the only real strategy you can have is making it as hard as possible for your opponents to beat your score – and you can achieve that by aiming for higher numbers, such as 15 and up, during your three-dart throw.

Also known as All Fives, or simply Fives, Fifty-One by Fives is a fun darts game that will challenge you in more ways than one – it not only tests your dart-throwing accuracy but your math knowledge, as well!

You’ll rarely see it played at the pub, though – I mean, who wants to solve math problems on their night out?

​Any given number of players could join in on the fun here.

The first player to score fifty-one fives – with all three darts scoring on their last turn – is the winner.

There’s no real strategy here – other than the fact that you should always make the numbers 5, 10, 15, and 20 your primary targets, that is.

It’s not entirely different than “standard” Cricket, but there are quite a few differences to keep in mind when you’re playing the UK version of darts, also known as Bowlers and Batters.

​Either play it one-on-one or split up into two teams of two or more people – batters and bowlers.

The main difference between the “standard” and English cricket is that the latter uses all available numbers on the board.

However, due to the objective of the game, scoring higher numbers – and 20 in particular – is preferred.

The end of round two determines the winner – whoever had the most points (or runs) during their round as a batter wins.

There’s not much to strategize about here, except maybe for the whole bowlers vs. batters thing – some players prefer the advantage of throwing first.

While there are tons of different darts games out there, the ten games mentioned in this guide are some of the most popular ones, which is why I figured it was important to familiarize you with their respective darts rules!

Now, get out there, and impress your friends with your newly found knowledge!

Did you find this guide useful, as in, you’re-going-to-nail-your-next-game-of-darts useful? Let us know in the comments below!